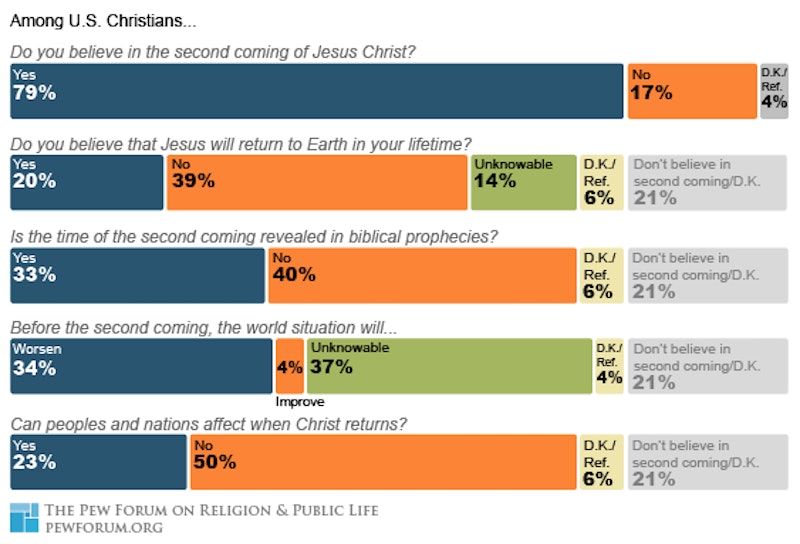 Above are the results of a recent survey done by the Pew Forum on Religion and Public Life asking Christians their thoughts on the second coming of Christ.  To be honest, I have some real yell at my computer screen moments about some of the conclusions.  Blame non-committal survey takers.  Blame low Bible literacy.  Blame bad preaching.  Blame whatever.  But in the end, there were a couple of results that got me ranting to co-workers.

Seriously?  More than 20% of the self identifying Christians say Christ won’t return or they don’t know if he will return.  This should be 0%.  As Christians don't we find hope in His return?  Plus Jesus himself said he would come back.  Take a look at Matthew 24.

2. Only a third of Christians say it will get worse before Christ comes back.

I realize there is a lot of debate on this issue, but I find it hard to believe only a third of Christians think it will get worse.  I personally believe the Bible gives us an indication that the church will be in ruins, there will be more suffering and an anti-Christ will emerge.  Are we really at that place in time yet?  Maybe I’m wrong on this point.  As a pastor friend told me this morning, if Jesus comes tomorrow we won’t say, “Oh, you didn’t make it hard enough on us.”  After all we have been anticipating the end times for 2,000 years.

On a calmer note, some other results on the survey were about what I expected.  Will Jesus return in our lifetime?  Who knows, other than God, right?  And there’s a split on if the Bible gives the time of the second coming.  Jesus talks about the future but also says no one knows the exact time other than the Father.

I find the last question on the survey to actually be quite interesting and something I’d like to hear thoughts about, because in the end, I don’t really think we know the answer.

Can people and nations affect when Christ returns?