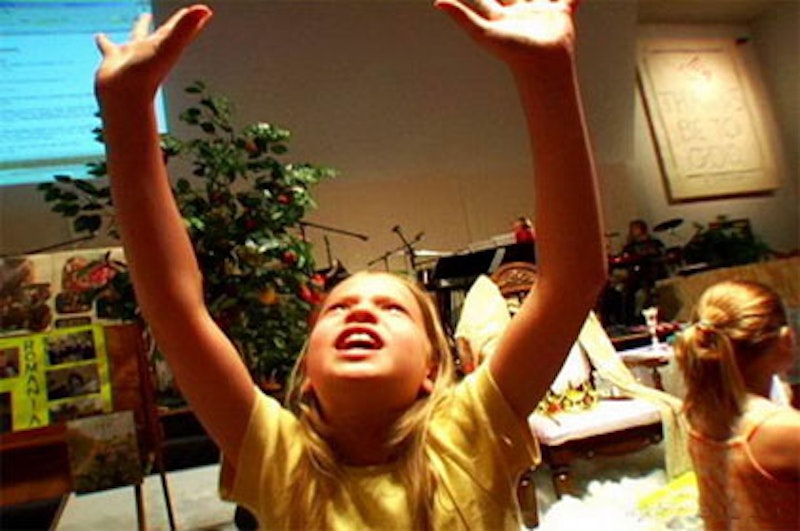 I recently viewed some clips of the documentary Hell House. It seemed similar in tone and style to Jesus Camp, as both filmmakers were not initially sympathetic to their subjects, but also committed to letting them represent themselves. And, both films feature Christians in middle America who are politically conservative and charismatic in their worship style. I remember reading about Jesus Camp that while many audience members were critical of the camp leader featured there, she felt she had been represented fairly. While there is a lot to say about these films, one thing that I’ve been thinking about since my recent viewing of Hell House is the ethics of watching intimate spiritual moments on video.

In both of these movies, there are scenes where the subjects have charismatic worship events including weeping and praying in tongues.  These scenes are important to the portrayal of these people, because it demonstrates that they are spiritually sincere, and this worship life is at the center of their spiritual orientation.  So I feel these scenes need to be included in the films because to exclude them would be a serious misrepresentation.

On the other hand, watching these scenes makes me very uncomfortable. I feel like a spiritual voyeur, intruding on what is in some sense highly personal. If I was in the place, also participating in worship, it would be different from simply observing this worship with my bowl of popcorn. After all, it is a communal event. But watching and not joining in, as the film medium requires, makes me feel disingenuous in some way.  I also wonder if the expressions as recorded are the same as they would be without an awareness of the camera. Does an audience of thousands or millions make a person pray differently?

One part of me believes this is why Paul commands that for someone to speak in tongues in worship there must always be an interpreter. Without someone helping all of us to participate, it feels that you are listening in on a private conversation that maybe you shouldn’t be hearing.

I’m still left wondering how to feel about the role of worship as media content. Would you allow your spiritual life to be filmed? How do you feel when watching video of others who are deep in prayer?