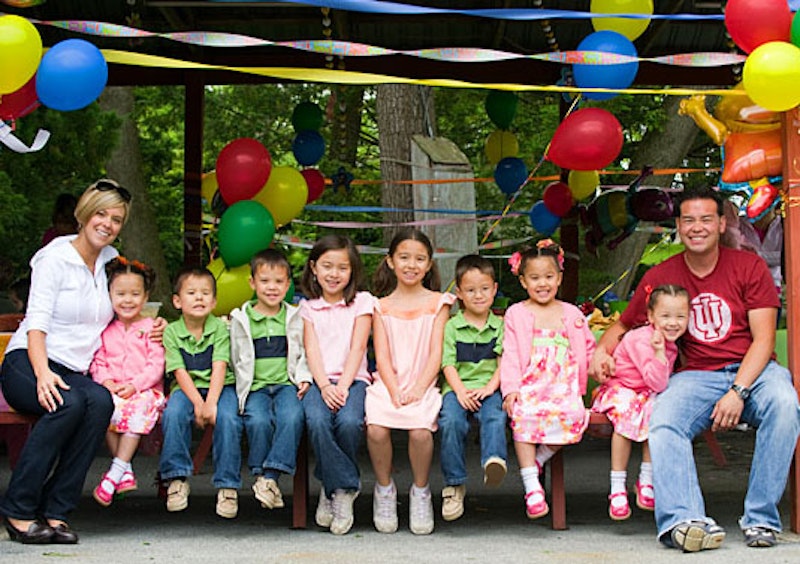 I was hoping to see how a Christian family is working though tough marital times.  Instead, it was a sad look into how fame can corrupt a family of eight.

“Jon & Kate Plus 8” kicked off its fifth season Monday night.  For those who watch the show there was much anticipation about how the family was doing after tabloid allegations that Jon (and recently Kate) had been cheating on each other.  Promos for the show implied the couple would set down together for the first time since the last season ended.  I wish I weren’t caught up in the hype, but for some reason, I couldn’t keep the TV turned off.

The Gosselins are an openly Christian family.  In past seasons they’ve talked about their church and support from the people there in helping take care of a family of twins and sextuplets.  As an example, volunteers would help with doing laundry or taking care of the kids.  To TLC’s credit, the religious side of the Gosselins life wasn’t completely edited out of the show.

I think that’s why I wanted to watch the season premiere.  I thought maybe this would be a chance for a married Christian couple, dealing with the issues of infidelity and fame, to be highlighted in a positive way.  But instead it was another example of a family falling apart – just another example people can point to and say, “See Christians are no different than the rest of us.”

Throughout the episode, Jon and Kate were rarely together.  They did their interviews separate (instead of being on the interview couch together).  When they were actually in the same location, they rarely talked to one another.  Throughout the episode, Kate seemed more focused than ever on the fact she and her family are celebrities.  At times it felt like Kate was even ignoring some of the kids even though she was planning and throwing the sextuplets a fifth birthday party.  The family that once was compelling to watch because of their realness has now become a victim to the drama filled, conflict driven reality television realm.  The change happened so fast.  Kate said, “very swiftly we turned into two different people.”

For me one of the toughest moments of the show came at the sextuplet’s birthday party when one of the girls told Jon she didn’t want him to leave anymore.   Another tough moment came towards the end when a tear filled Kate talked about the fact the couple could be headed for divorce.

Then frustration set in.  Jon said something along the lines that as long as he and Kate were friends, that would be good enough for the kids even if the two aren’t married any more.  Any hope I had about a Christian response to situation was killed with that single comment.  The show was over, not one mention of God or faith from this Christian couple.  Maybe TLC edited out those parts.  Maybe that’s wishful thinking on my end.

I almost didn’t write this post because in a way it makes me feel no better than the media that’s giving Jon and Kate all of this attention.  I really want them to be able to work this out and the increased media scrutiny doesn’t help.  I want to see a positive outcome not because I feel oddly attached to a TV family, but because it’s time for people to see a Christian couple that can work through tough issues using their faith and not just give up to being another statistic.

Fame must be a hard thing to let go.  It’s clear the attention Jon and Kate were getting from the TV show was starting to cause strain in their personal lives well before the last season ended.  Why not let it go?  If you’re in it for the kids, as they both say, let the show go.  The reality show money may dry up, but isn’t that better than a family falling apart?  And maybe the issues between Jon and Kate would have happened if a camera never entered their home.  Who knows?  But I hope Jon and Kate can find the courage to put away the issues of fame and focus on the health of their Christian family and their personal faith.