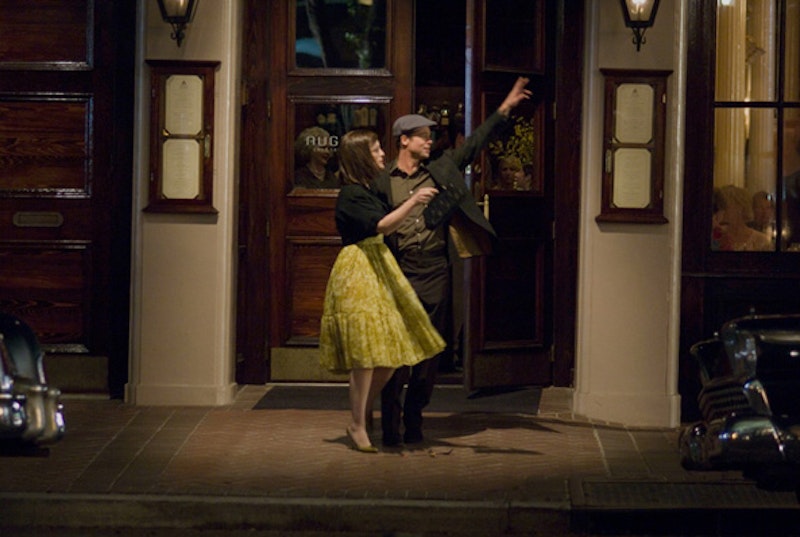 Shouldn’t movies be able to imagine the afterlife better than any other art form?

I thought of this while watching “The Curious Case of Benjamin Button.” The film is mired in aging and death, yet for some reason it never broaches the topic of the great beyond.

Brad Pitt plays the title character, who is born old – wrinkly and infirm – and grows younger each day. That doesn’t mean he is immortal, however. Instead, he passes from a decrepit state into middle age, then into youth and on to infancy and eventually death.

That’s not necessarily the stuff of which multiplex tickets are sold, so the movie’s marketers have emphasized the poignancy of the relationship between Benjamin and the love of his life, played by Cate Blanchett. (They share a brief, rapturous romance at the midpoint of the film, when their characters are momentarily in the same age demographic.)

According to the movie, this is as good as it gets. In life, happiness is a fleeting prospect. At one point, as Benjamin and Blanchett’s Daisy lie together, he mournfully observes, “Nothing lasts.”

Christians, of course, believe the opposite, which may be why I found “Benjamin Button” overwhelmingly sad, rather than poignant. The movie is resigned to thinking of life as a weary trudge, with joyful moments strewn here and there. It may, somewhat miraculously, go backwards, but it doesn’t go on forever.

Forever, though, is the Christian’s hope. We believe in eternal life with Jesus Christ, even if we aren’t exactly sure what this will look like. (My 6-year-old daughter has her own idea. Only this week she told me that we arrive in heaven as babies and grow up until we reach the age at which we want to live forever.)

I wish more movies took on the challenge of filling in this gap. Revelations, with its fantastic, symbolic imagery, has inspired grandiose, effects-laden visions such as “What Dreams May Come” and “Constantine.”

Going back further, there was Max von Sydow playing chess with the Grim Reaper in Ingmar Bergman’s “The Seventh Seal.”

In the lovely, 1998 Japanese film “After Life,” the recently deceased select their favorite memory, which is the only one they can take with them into eternity. And, of course, we know that “All Dogs Go to Heaven.”

Imagining the afterlife is a daunting task, so I can understand why “The Curious Case of Benjamin Button” – which was a film making wonder in so many other ways – remained so earthbound.  Still, I eagerly away the picture that speculates on what heaven might be like in a way that resonates with me.