“Pinocchio” still works as a harrowing exercise in moral instruction for children.

Christians like to think that our children learn what is right and wrong from Sunday school, church youth groups and other Biblically based activities, but could it be that secular movies are equally instructive for little minds?

I ask because Walt Disney’s “Pinocchio,” one of cinema’s classic, childhood morality plays, was recently reissued on DVD. 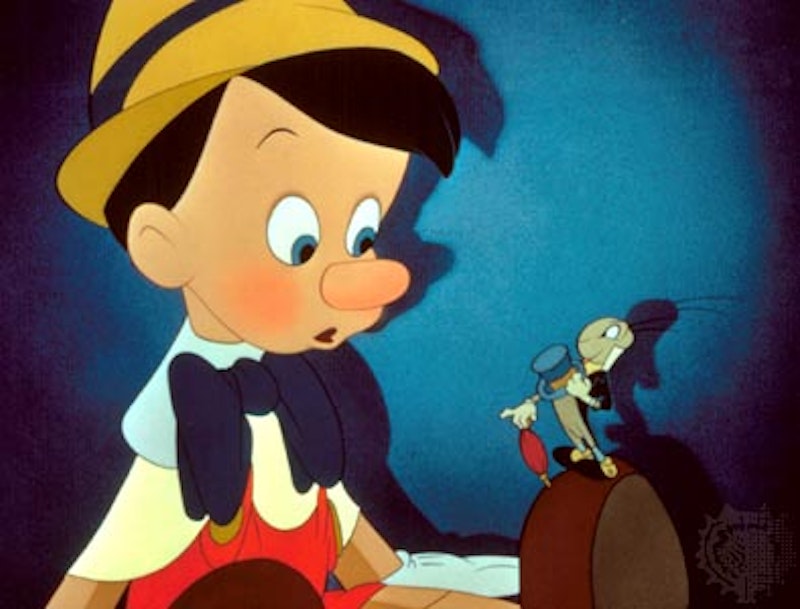 Released in 1940 – it was the studio’s second animated feature, after “Snow White and the Seven Dwarfs” – “Pinocchio” still works as a harrowing exercise in moral instruction for children. As Pinocchio, the marionette come to life, tries to follow the Blue Fairy’s command to be “brave, truthful and unselfish,” his fortitude is challenged by the likes of a sly, flattering fox; a greedy puppeteer; and the temptations of Pleasure Island.

Pinocchio’s moral failure in the face of each of these challenges comes with a heavy price. After smoking, drinking and playing pool on Pleasure Island, for instance, he and his fellow young truants begin to turn into donkeys. Putting a preschooler in front of this is sort of like putting a troublesome teen in front of “Scared Straight!”, the 1978 documentary in which convicts shared the terrors of prison life with delinquent kids.

OK, “Pinocchio” has a bit more artistry than that. Like all of Disney’s classics, the movie is packed with intricate details, especially in the workshop of Geppetto, where Pinocchio is “born.” A wonderland of cuckoo clocks, wind-up toys and other delights, it’s where we first meet Jiminy Cricket, the cheery little fellow who is anointed by the fairy to be Pinocchio’s conscience and who stands as one of the landmarks in feature-length character animation.

This cinematic mastery, coupled with the story’s strong moral framework, is why I considered “Pinocchio” a must-see for the little moviegoers in my house (they both made it through unscathed). By handing over such instructive authority to a secular property, though, am I undermining the influence that, say, Bible stories, may have on my kids? After all, some Christian parents restrict their children’s exposure to movies exactly because of this concern, limiting them to Veggie Tales videos or similar religious fare.

I wonder if there isn’t a middle ground. The movies and the church don’t have to be in competition for the eyes and ears – and consequently hearts and minds – of our kids. Perhaps there is a way to make Bible lessons and secular movies work in conjunction – to point out to kids, for example, how something like “Pinocchio” mirrors the challenges, both external and internal, faced by David, another boy who had to grow up very fast.

How do you balance kids’ movies and Sunday school in your house?