Season two of The Crown reminds us that royals are mortals too.

Ever since the first season of The Crown I have been fixated on the British royal family. Prince Harry and Meghan Markle’s recent engagement only added to the obsession as I dug deeper into their history. I am fascinated by their lifestyles, I am thoroughly confused by their genealogies, and, of course, I melt every time I see a picture of little Prince George or Princess Charlotte. But Queen Elizabeth II captivates me the most. I am inspired by her strength, her humility, her generosity, and her humanity.

Granted, the Elizabeth we see on The Crown is a fictionalized character, played by Claire Foy. Yet here too she is a fascinating figure. In this recent second season, the Queen is wrestling not only with matters of state, but also with matters of family and the church. The American evangelist Billy Graham (Paul Sparks) even makes an appearance in the sixth episode (“Vergangenheit”), sitting across from the Queen in Buckingham Palace while she is in the midst of a difficult decision.

This decision involves a choice that she believes would conflict with the faith she follows (she identifies herself as a “simple Christian” to Graham). Yet it’s a choice that would both honor her country and her own father’s legacy. King George VI, her father, only became king because her uncle, Edward VIII (Alex Jennings) abdicated the throne in 1936. In the early 1940s, the newly retired royal was still so blinded by his desire for security and power that he chose to make deals, promises, and connections with high-ranking Nazi officials. On The Crown, this catches up to him in 1958, as he stands in front of Queen Elizabeth and denies the significance of his betrayals.

As his niece and as a Christian, Elizabeth wants to forgive him. But she doesn't know how to forgive without betraying the loyalty of her country. So she refuses. Edward insults her, calling her weak-minded and cold-hearted. “Who has done more damage,” he asks. “Me with my willfulness, or you lot with your inhumanity?”

In this second season of The Crown, I believe we see the very opposite of inhumanity. We see instead an abundance of humanity. The utter, total depravity of humankind in all its forms. We see the righteous indignation of the Queen, the blindness of her cabinet, the infidelity of the rich and powerful, the prejudices of old-world politics, the troubles of a public marriage, and the demons of a dark past returning to cause anger and discord. We see that royals are mortals too. “The problems of the world can be summed up in one three-letter word: sin,” says Billy Graham during one of his rallies, which the Queen watches on television. “God looks deep down inside of you. God sees how you really are down inside.”

Graham goes on to quote Psalm 58: “Do you rulers indeed speak justly? Do you judge people with equity? No, in your heart you devise injustice, and your hands mete out violence on the earth. Even from birth the wicked go astray; from the womb they are wayward, spreading lies.”

In this second season we see an abundance of humanity—the utter, total depravity of humankind in all its forms.

During Graham’s visit, the Queen asks the evangelist: “Are there any circumstances, do you feel, where one can be a good Christian and yet not forgive?” Graham answers her difficult question with this simple statement: “We are mortals, that is our fate. But we need not be unChristian ones. The solution for being unable to forgive is this: one asks for forgiveness oneself, humbly and sincerely, and one prays for those that one cannot forgive.”

Elizabeth too, feels the weight of her humanity, along with the weight of the crown, the country, and her family. In “Vergangenheit,” we often see her depicted with her back to the camera as she stares out of windows, at closed doors, and at the television. She is listening, then fuming, then lamenting with her body language as her shoulders shift and clench with the burden she has to carry. Her fingers are often either bound together in her lap or fiddling with her three-stranded necklace of pearls as her anxiety mounts. The physical pain that her family and her country has caused carries over to how she holds herself when no one is watching.

And so, in the last scene—when we see Elizabeth kneeling in front of a chapel altar praying for the troubles of the world, her uncle’s blindness, and her own sin—we are reminded that she identified herself earlier in the episode as a “simple Christian.” We again see her from behind for a moment, surrounded by the colors of the stained glass windows, and it is calm. We see her as a mother, a daughter, a sister, a niece. As the camera shifts to her profile, we see her eyes are closed and her breathing is steady. But this is temporary. Her eyes blink open and her gaze shifts among the panes of the windows, as if she is looking for peace or answers or enough faith to see herself through whatever comes next. We see a young monarch stepping into a new decade of her life, realizing that there is nothing “simple” about being a Christian at all.

Kate Meyrick is a graduate assistant and Young Adult Ministry Scholar at University of Dubuque Theological Seminary, working towards a Master of Divinity. You can follow her on Twitter and Instagram @k8meyrick and read more of her work at Further Up, Further In. 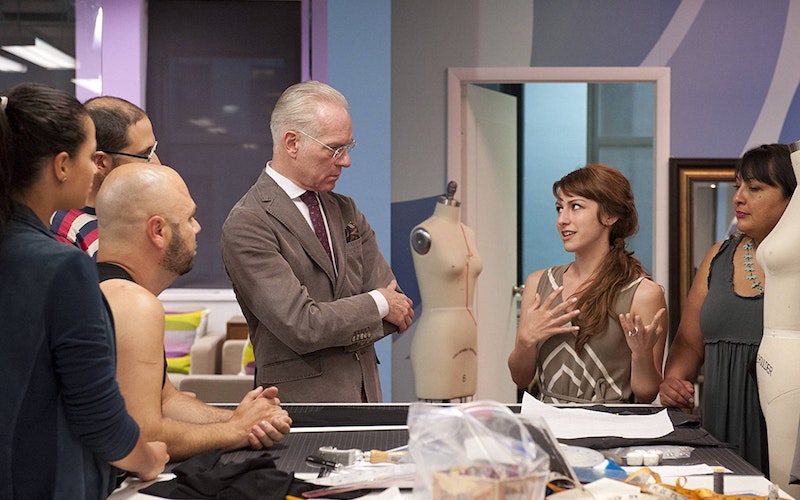 Project Runway and Clothing as Story