It’s the time of year for creating top-ten lists, an enterprise that by its very nature is somewhat limiting and unfair. Can you imagine ranking the Top Ten Parables of Jesus?

Nevertheless, we do it every year – if nothing else, such lists can start good conversations about the sort of art that was created in the past 12 months. And so here are my 10 favorite movies out of the more than 100 I reviewed in 2008. I’d love to hear your own. 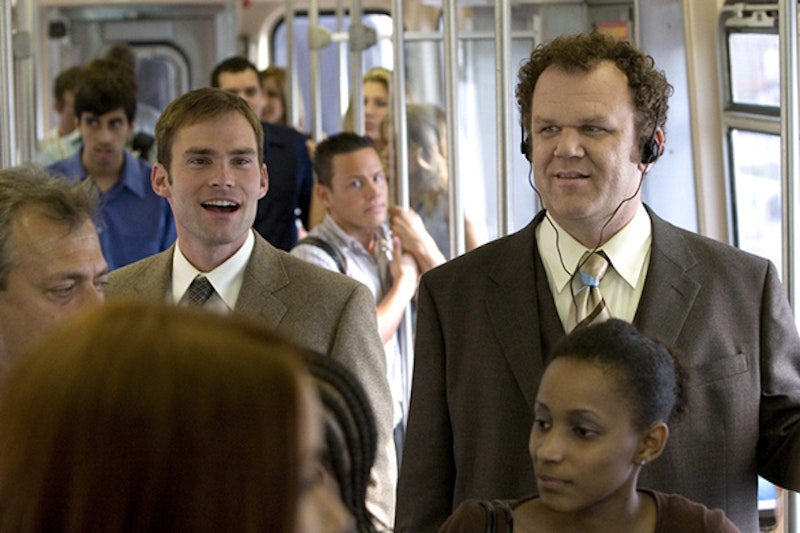 One of the hard lessons of 2008 was the folly of putting too much faith in the systems of man: the stock market, the housing market, the job market. Really, almost any market built on worldly – rather than Godly – ideals.

“The Promotion,” a largely unseen black comedy about two grocery-store managers (Seann William Scott and John C. Reilly) feverishly competing for a promotion to a job they don’t even really want, cleverly captured the year’s sense of economic desperation. As these guys comically flail about, you wonder if it’s possible to run the rat race and keep your God-given dignity intact.

As I posted here before, “Slumdog Millionaire” has a startlingly Christ-like approach to poverty and the impoverished. Director Danny Boyle follows an Indian orphan from the slums of Mumbai to a winning seat on a televised game show, and not for a moment does he pity or condescend to the movie’s downtrodden characters. Instead, “Slumdog Millionaire” meets them on a level playing field, depicting them as vibrant and valuable members of the human community. Sound familiar?

When Hurricane Katrina pulverized New Orleans in 2005, residents of the city’s neglected Lower Ninth Ward asked themselves: Where were our neighbors? Where was the government? Where was God?

“Trouble the Water” is a first-person account of that anguish. Most of the documentary’s footage comes from the home-video camera of Kimberly Roberts, an aspiring rapper who stuck it out for most of the storm. Her pyrotechnic, spoken-word performance at one point is nothing less than an irate prayer.

4. The Curious Case of Benjamin Button

I might post on this further another day, but for now I’ll just say this sad, beautiful film about aging and death – in which Brad Pitt plays a man who is born old and gets younger every day – notably lacks any consideration of an afterlife. Perhaps that’s why I found it more mournful than romantic.

Forget comic-book movies – you’d be hard pressed to find many movies of any kind that are more morally complex than this masterful, visually audacious Batman installment. When it comes to good and evil, Christian Bale’s conflicted Batman, Heath Ledger’s anarchic Joker and Aaron Eckhart’s idealistic Harvey Dent are flips sides of the same trick coin.

Sure, Keanu Reeves warned us of the dangers of defiling God’s creation in “The Day the Earth Stood Still,” but I much prefer the environmentalism of this Pixar gem. It’s no less apocalyptic – the endearing title robot is charged with tidying up an Earth that humans have turned into a garbage dump – yet in their pessimism the Pixar animators still manage to work movie magic.

Forgiveness, compassion, redemption. Such Biblical qualities are beautifully rendered in this tiny independent effort about the relationship between a suicidal single man and his latchkey nephew. The movie – an assured debut from writer-director Lance Hammer – reminds us that we’ve all hurt others; we’ve all been hurt; and that you never know where you might find precious healing.

Don’t look for similar thematic depth in this thrilling “Godzilla” reworking – about a group of partygoers who videotape a giant monster stomping through Manhattan – yet with its eye-of-the-camera conceit, the movie offers an intriguing consideration of how technology has become intensely personal, even poignant.

In far too many Christian circles, artistic creativity is one of the least appreciated of God’s gifts. Perhaps that’s why I was so taken with this loopy comedy, which exists to celebrate creative expression.

After accidentally erasing all the tapes in a video store, an employee and his friend (Mos Def and Jack Black) recreate and film their own versions of Hollywood blockbusters using found costumes and cardboard props. After seeing their “Driving Miss Daisy” – with Black in the Jessica Tandy part – I can only imagine what these two would do if dropped into a church drama group.

I’m not sure there is a redemptive angle to this Tinseltown satire - and there is certainly no way to defend the movie’s shockingly filthy (and often very very funny) dialogue. But for any veteran movie-watcher who has tired of self-centered celebrities, it is a joy to watch director-star Ben Stiller Hollywood hubris.