As spiritually beautiful as U2's Songs of Innocence is, John J. Thompson is having a hard time hearing it through the corporate noise.

U2 has provided a musical and spiritual environment for me - and millions of people like me – in which to process global, political, interpersonal, emotional, ethical and theological issues together, in an aesthetic way. They’ve been so much more than just another rock band. Against all odds and inspired by a uniquely passionate and ecumenical faith in Jesus, they set out to change the world and did. Ever since word of a new project – rumored to be named after Psalms 120 through 134, the Songs of Ascent - started to spread during their 360 Tour I have been eagerly anticipating their next release.

This week my favorite band both thrilled and disappointed me at exactly the same time. I’m dizzy. I need to sit down.

This week U2 released an album entitled Songs of Innocence for “free” - with Apple Inc. picking up the tab. In fact, the band appeared at Apple’s new product announcement to unveil that their new album was already available on my computer or iPhone, ready for me to download. I was shocked. I was excited. I was bothered. They put an album on my computer without my permission? I’m glad Kanye West didn’t know that was an option!

Is this a watershed moment in modern music history? Is the era of paying for music over? Is there a new privacy permission switch I need to turn off on my phone? What is going on here?

Actually, I don’t think this particular move is revolutionary or generous. I’m happy to be listening to new music by U2, but I’m troubled. It’s not the “free” part that bugs me, though. It’s the Apple part. Big albums are released every week through Spotify or Beats for “free.” The only difference here is that you have to have an Apple account, a Beats account or a membership to U2.com to get Songs of Innocence prior to its normal release next month. This sponsorship by Apple is about marketing the slagging iTunes store, giving Beats (now owned by Apple) an advantage over Spotify for a month and using a stunt to get people’s attention. This may have been the only way for U2 to achieve the kind of cultural domination to which they have become accustomed. It’s too bad, though, because the music is actually quite good. Giving a project of this emotional and spiritual depth to Apple feels like throwing pearls before swine.

I’ve never had a problem combining the Gospel with rock and roll. But with Apple?

For the most part the songs here reflect on the band’s formative years musically, politically and spiritually. They riff on the artists that inspired them as kids and ruminate on tragedies such as Irish violence and the loss of Bono’s mother when he was a teen. “Song for Someone” is a beautiful love ballad; “California (There Is No End to Love)” does its best to shimmer like a Beach Boys song. “Raised By Wolves” and “Volcano” turn up the heat and the volume and “Sleep Like a Baby Tonight” gets all ambient and electro. The sonic palette is mostly core U2: expansive, hooky and enthusiastic. The tones are flawless and Bono’s wonderfully imperfect voice is in fine form. The lyrics are interesting, challenging, poetic and sincere - just like we expect. The bottom line is that U2 is still a great band and Songs of Innocence is a strong album. This is why it is so disappointing that it feels like little more than a “value add” for a new iPhone.

To Apple, music is just the stuff that makes people want better gadgets. To U2, music has been much more. The deeper spiritual truths are pulsing throughout this collection, but it’s hard not to feel like my heroes just became “content” for Apple and blockers for Beats. I’m sure the iPhone 6 and the Apple Watch are cool, but Songs Of Innocence is art! Right? With all of the madness in the world right now we need a great U2 record. Don’t we?

The dizziness is coming back.

As beautiful as this collection is, I’m having a hard time hearing it through the corporate noise. I’m holding out hope that over time these songs will transcend the cheap way they were presented to me. I’ve never had a problem combining the Gospel with rock and roll. But with Apple?

I wish it could be enough for U2 to be one of the best bands in the world, instead of needing to remain one of the biggest bands too. If they can’t dominate without corporate sponsorships maybe they should just go back to playing clubs. I’d be there.

“JJT” has been chasing the thread dangling between eternal truths and temporal creative experiences for nearly three decades. He is a writer, a businessman, a father, an artist and a seeker. Read more about him at 33andathird. / Illustration by Jerod Clark. 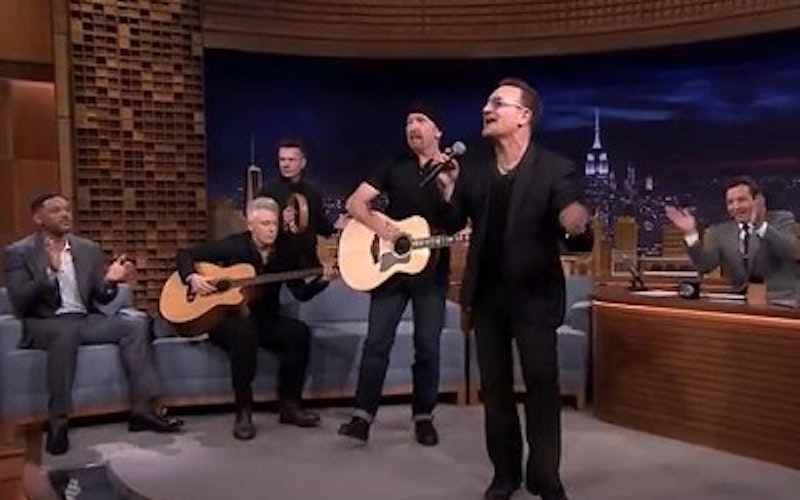 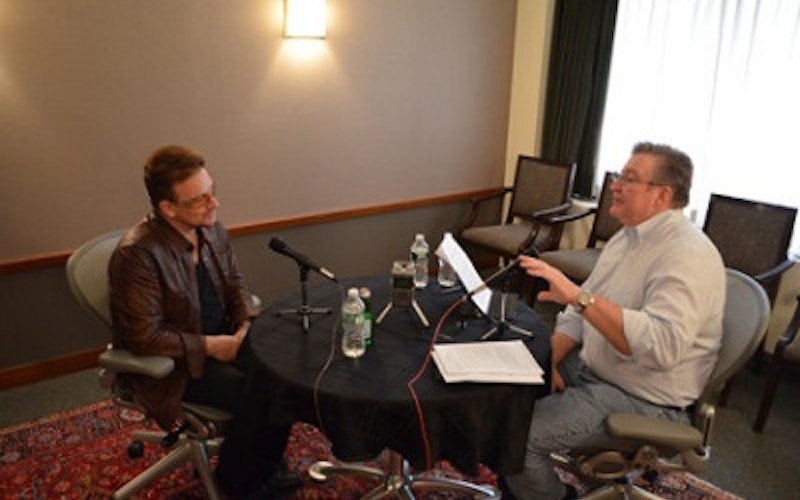