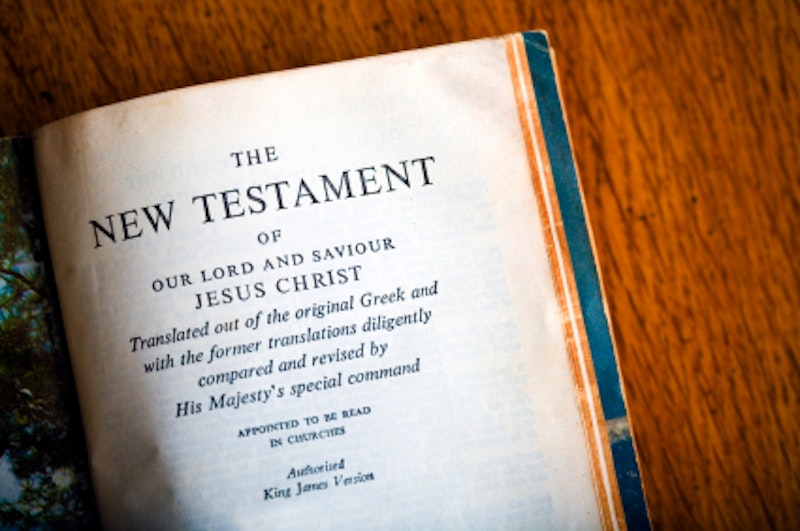 There's an old urban legend, first recorded in the late 19th century, about a translator who asked a congregation for funds for a new English translation of the Bible. One farmer in the congregation retorted, "What's the matter with the good old King James Version? That was good enough for St. Paul, and it's good enough for me." A later ver­sion of the story has Miriam “Ma” Ferguson, governor of Texas in the 1920s, speaking in favor of English-only legislation by saying, “If the King’s English was good enough for Jesus Christ, it’s good enough for the chil­dren of Texas!”

Both stories are probably fictional, but they reveal something very real about the way we sometimes revere the King James Version too much, especially on the eve of its 400th anniversary.

With its "thees" and "thous," its "smotes" and "begats," the KJV sounds lofty and literary and oh so holy. The problem is that we start to treat particular linguistic or literary characteristics as themselves sacred - as though a translation style could be as sacred as Scripture. "Thou shalt" sounds more sacred and serious than "You must," even though it isn't. The same goes for "Thy word" and "Your word," though guess which one became a song title. I still remember my grandfather using "thy" and "thou" in his table prayers, so swayed was he by the sense of this archaic language being more fit for prayer.

Of course, "thou" isn't any holier than the word "you." It's just archaic. Archaic words have more charm, gravitas and grandeur, but they also create unnecessary distance between Scripture and us. And reducing the linguistic distance between Scripture and us was the entire point of translating the Bible from the Latin Vulgate into the languages of laypeople - an effort of which the KJV was the capstone. God doesn't speak to us in 400-year-old language that sounds like it belongs in a museum. God speaks to us in living, lively words that meet us, post-Pentecost, where we linguistically are. This is why Eugene Peterson's "The Message" is so vivid and powerful. He lets language have the full impact it did in the original Greek and Hebrew.

In this 400th anniversary year of the KJV, celebrate its literary influence. Celebrate its historic conquest of the Vulgate (though remember that Wycliffe and Tyndale's Bibles and even the Geneva Bible were even more historic and courageous). Celebrate the KJV as a translation that served the English-speaking church well for a while, even though it overstayed its welcome. But remember that the KJV is a relic, and that the words of the Scripture should be living and lively, not gilded and old.

Nathan Bierma is communications manager at the Calvin Institute of Christian Worship in Grand Rapids, Mich., and author of “Bringing Heaven Down To Earth: Connecting This Life to the Next.” His website is www.nbierma.com.